Contains Graphic Images… How I Lost My Finger Breaking Up A Dog Fight!

For a little over a year now I have thought about sharing, how I lost the tip of my finger breaking up a dog fight. But, It’s still a tender subject 😉 and I wanted to spare myself the embarrassment and ridicule. Honestly, I felt like my ego was getting in the way of why I started my business. And, this has motivated me to put my ego aside and share my story with you in hope that I might be able to help somebody who is struggling with their dogs!

So, here it goes…

First, you should know, that I have been known to keep 4-6 dogs together in a pack when I am at home with them for almost 20 years now. The pack that I currently have are all Ridley American Bulldogs that been bred and raised by me so they have always been together. And, its because they trust me that they do not have to worry about rank order, sibling rivalry and hierarchy. “The byproduct of trust is peace!”

Back in August of 2017 Honda and Buck had a nice healthy litter of 4 beautiful American Bulldog pups. And, I had Honda raising them upstairs next to my bed in the whelping box. This allowed my other dogs to still come in while Honda was up with her pups. And, for two weeks everything was going fine! Honda and the pups were healthy and the other dogs had gotten used to being downstairs.

Then September 29th, I went to a friends wedding rehearsal and as I always do before I leave, I put the dogs away and left Honda with her babies. We had a great time at the rehearsal and everything was ready for the wedding the next day.

But, As I returned home I found myself excited to see my pups and to this day I don’t know why I let the other dogs out of their kennels first. But, I did and I went inside and thought I shut the door behind me. However, I did not shut the door completely. This turned out to be one of the biggest mistakes in my life!

I jammed upstairs, saying hi to Honda and checking on the pups. The next thing I know… I hear the other dogs push the front door open and come inside. Honda barked and took off down the stairs, I knew there was no stopping her! So, I immediately left the pups to go after Honda. But, by the time I got downstairs Honda and Buck where already fighting. Which triggered Angel, Ruby, Diamond and Bruno to start half ass fighting each other. So, I grabbed Buck and Honda by the collars to get them apart and sure enough they both let go almost immediately. I had Buck in my right hand and Honda in my left and when I was moving Buck away he slipped out of his collar and went back to fight with Honda. That is the moment I dropped his collar and reached back in to stop him… The next thing I know “Pop” there goes my finger tip! I have to be clear, Buck did not maliciously bite me, I just screwed up!

I have been bitten several times bad in the past, but I knew this one was very bad and that I had to get them all apart fast before I passed out. At that moment I realized i was in trouble and my adrenaline spiked! I grabbed both Honda and Buck and threw them out the door together and when they hit the ground they broke up and thankfully ran to their kennels. When the others saw me turn my attention towards them they immediately broke up and ran to their kennels too.

Thank God, because I started feeling a little light headed and I remember purposely NOT looking at my finger or the lack of it until I got back into the house. When I got inside and saw the amount of blood everywhere and it freaked me out a bit and when I did look at my finger I just thought… oh shit! That’s not good, I need to go now! So, I sucked it up, got my bearings, bandaged up, called my neighbor and told him I was walking down my driveway and that I needed a ride to the hospital.

When I got to my neighbors place he asks… “Did you look for the tip?” I told him “NO, I think Buck ate it!” lol… By this time, I was alert but completely out of it! Not to mention I live about 25 minutes outside of town and I can clearly remember saying… “I am going to pass out or puke.” The blood had soaked through my bandages and the pain was intense to say the least.

When we got to the hospital they took x-rays and told me I was lucky to still have use of the tip of my finger and that the bone needs to be cut back because it was sticking out. So, they bandaged me back up, told me to call the Dr. Monday morning and away they sent us!

When I got home I figured Id look for my finger tip. And sure as shit! There it was laying right there on the ground where the fight took place. I do remember looking there but I didn’t even see it there. So, I put it in the freezer and when I went in to the see the doctor the nex Wednesday I brought it with me but he said he could not reattach it. I thought…. shit just sew it back on! But, instead he trimmed the bone back and told me to let it heal over. That was the weirdest sound hearing the bone being clipped off.

Let me tell you… Don’t get your finger bit off! lol The healing process took a long ass time and still to this day it bothers the crap out of me! This accident honestly changed my life! I have loving friends and family that helped me through the healing process. Now, when I look at Buck Stumpy (which is the name my good buddy named it, as well as gave me the courage to write this post) I can see it as a positive reminder to not become complacent with my dogs ever again. Not only for my sake but for my dogs as well. Cause the last thing I want is for my younger dogs to become unsure and loose trust of me and their sibling and learn to fight each other. Not to mention I would like to keep the rest of my digits if you know what I mean 😉


See the thing is, I had not had a fight between my dogs for almost 5 years. So, I had became comfortable and complacent! And, I know 100% what comfort and complacency with mine and other dogs will eventually lead to. Unfortunately, my emotions got the best of me and I ignored my own rules!

What is the moral to this cray story? Not to get your finger bit off by your dog!? Yes… however, my real intent is to show you how important it is to not become lazy and complacent with your dogs! Be proactive and handle and train your dog properly, but also control your environment. The thing is, I knew Honda is a protective dog and mother and rightfully so. Its what i bred and raised her to be! Because my emotions where high, I neglected to respect that and handle the situation accordingly.

Whats important is that you learn from my mistake, stay conscious, read, listen and understand your dogs language so you can handle them accordingly. If you are having, pack problems, fights and aggression their is always a reason why…

My advise would be to get help before your dogs start fighting! It only takes 1 fight for a dog or pack to become unsure, unstable, loose trust and become defensive and reactive. Who can blame them…Right? It is not worth loosing their trust from the pain and suffering your dogs can endure from a dog fight! Not to mention how dangerous it is for you to break one up. 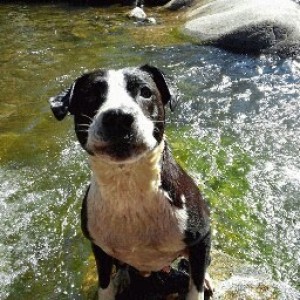 All Posts »
PrevPreviousAre you tired of being pulled by your dog?
NextThe Knine Lingo PodcastNext

Ready For Your Free Consult? Dog Training Will Empower Your Life!

“Every dog has their own genetic disposition. So, yes some dogs are harder to train than others. However, with a good environment and some professional help you can end up with an obedient and well behaved canine companion.”

Want to get Garrett's Tips, Tricks, Podcasts and more in your email? Enter Your email below!